Armenian Museum of Moscow and Culture of Nations, 2021

Armen Daneghyan. The Artsakh topics are not completed used by me yet 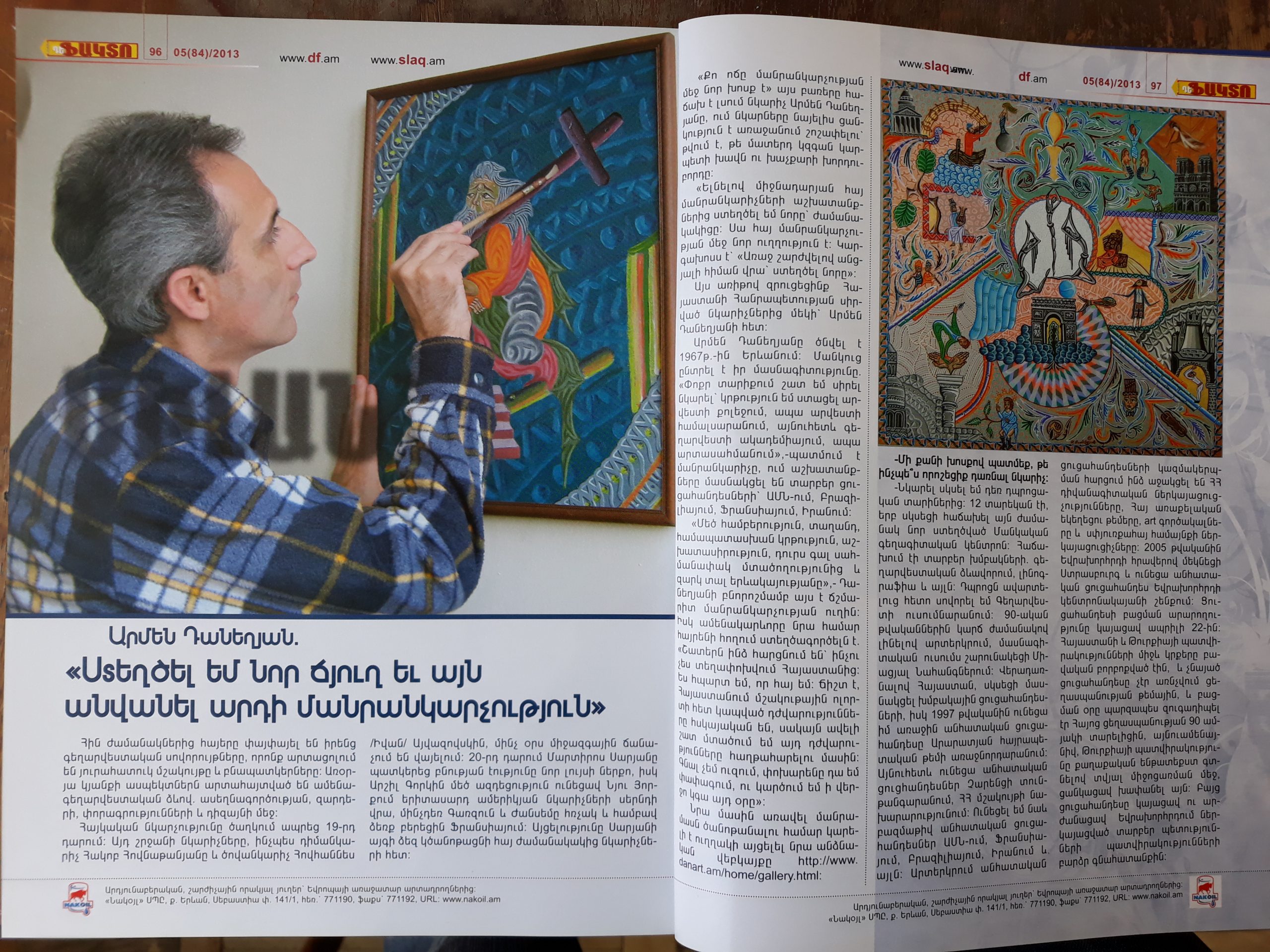 “As the branch of art that I have created is called Modern Miniature, it’s obvious that my favorite artist is Toros Roslin, a Miniature Artist from the Middle Ages.

I was impressed by the colors, the plastics and the complex composition solutions of his artworks at the beginning of my career and so chose art as a profession.” 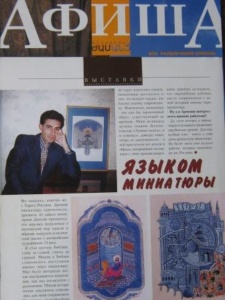 The medieval miniature has attracted the artist for many years. Armen Daneghyan recognizes that he has always wanted to talk to Toros Roslin, who lived in the 13th century. Daneghyan began to learn the Bible in detail, which helped the artist to understand all the symbols in old manuscripts. Later, when he created his own style and was able to express his own thoughts, some excellent works of art were created: “The dream of St. Grigor The Enlighter”, “The series of Apocalypse”, which includes 7 artworks, etc.

The artist is fond of cold and calm colors and uses them in his artworks. Later he changed the theme of his artworks and began to paint on patriotic, philosophical and other themes. Armen Daneghyan has created a cycle of classical European culture. Some of the artworks of this cycle are “Beethoven”, “Nicolo Paganini”, “The look of Shakespeare”, etc. During our talk, the artist informed me, that this spring, in April, he will have a solo exhibition in Strasbourg. The organizer of the exhibition is The Council of Europe. “This exhibition is a huge responsibility for me,” the artist said, as he would represent his art to the European audience. We would like to note, that in the days of the exhibition, the spring summit of the Council of Europe will begin. 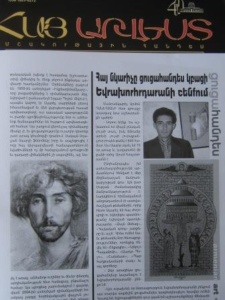 We talked to the miniature artist Armen Daneghyan during his working process. He apologized to us and said that he worked only under natural light, and especially in winter every minute of the day was important to him. This artwork, called “Aram Khachatryan”, he began to paint 15 days ago and will finish a few days later.

He also said that there was an Armenian diaspora in Strasbourg, but it was very small. Most of the visitors to the exhibition will be Europeans. When we wished Armen good luck at the next exhibition, he thanked us and said that this exhibition in Strasbourg would be an important page in his biography. 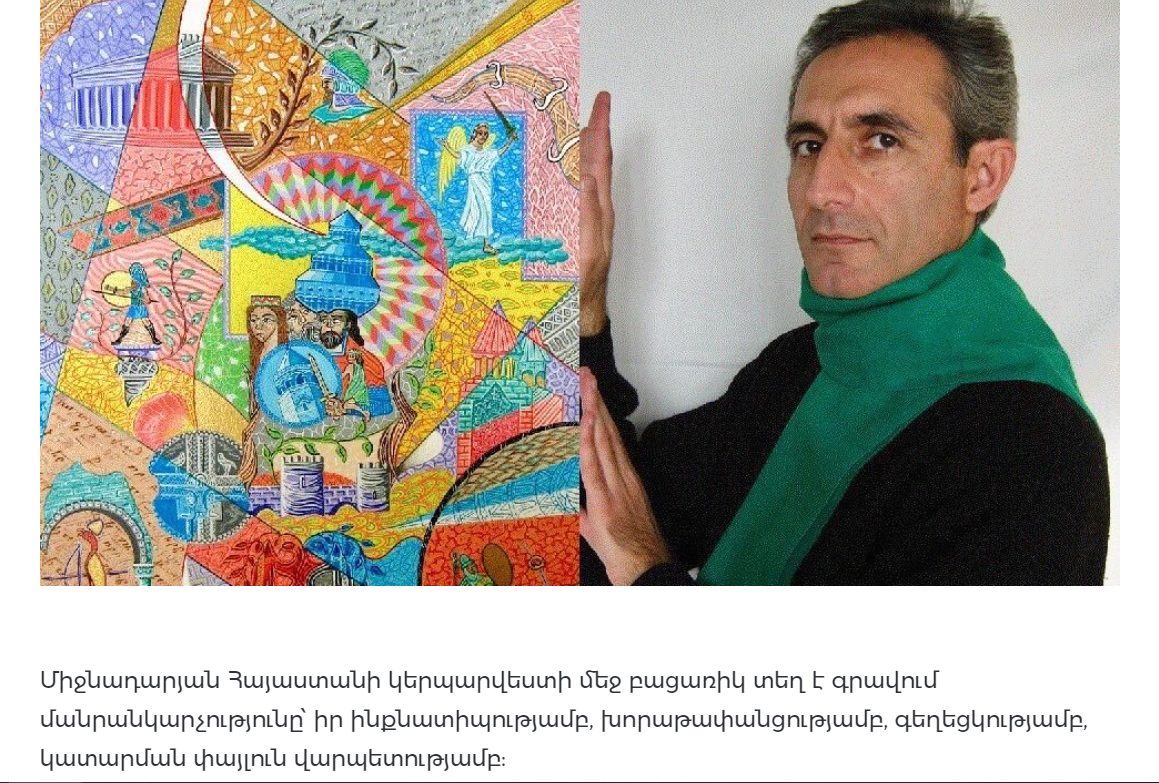 Modern Miniature as the mixture of the past and present

Talent, education, diligence, and what is the most important, great patience and rich imagination. Here is the right path of modern miniature art, according to Armen Daneghyan. 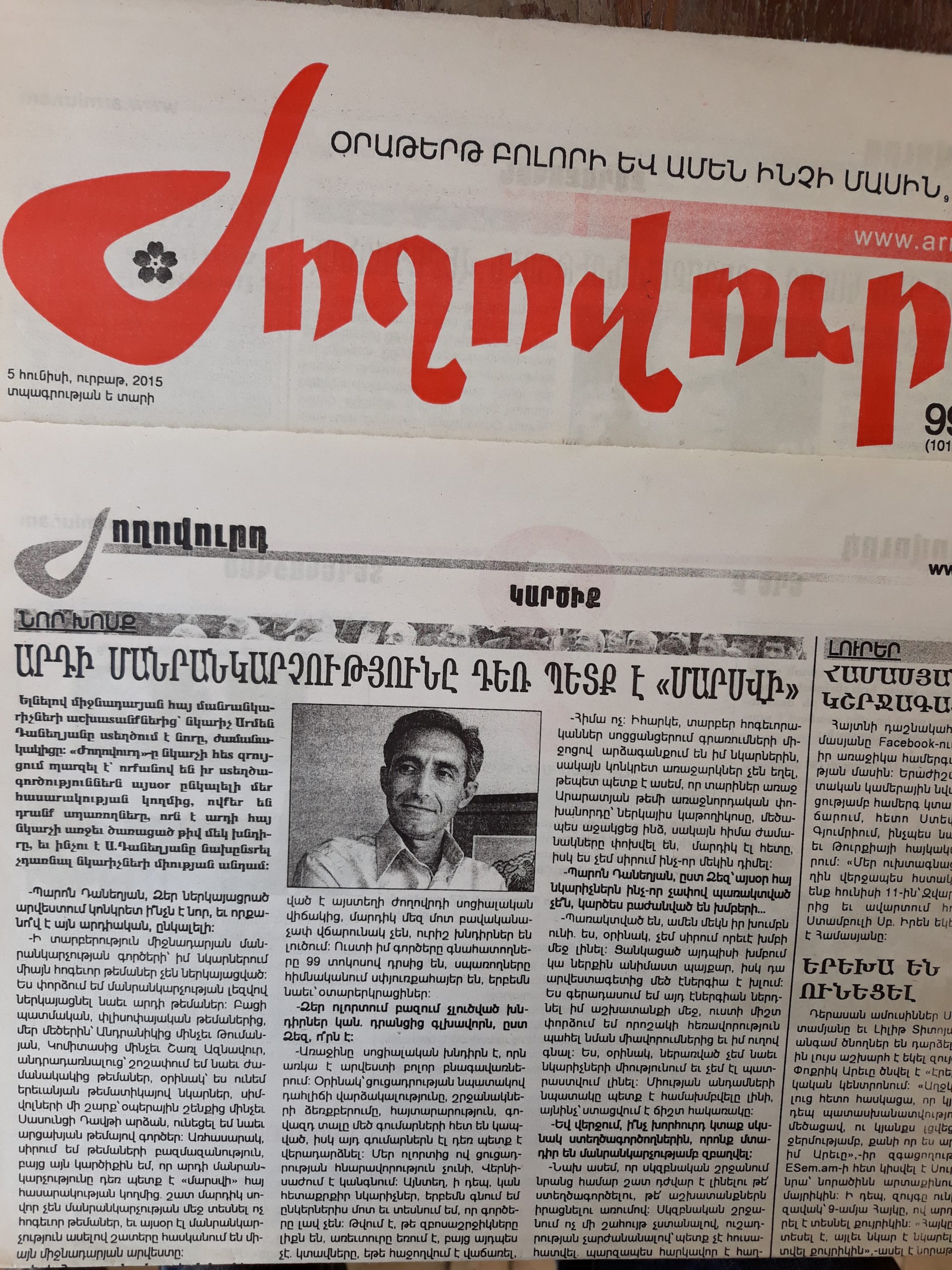 “I try to represent modern issues with the help of Miniature language. I love diversity in topics, but I think that Modern Miniature should still be accepted by Armenian society.

Nowadays, many people believe that Miniature Art is only related to the Middle Ages, as lots of people do not see Miniature out of religious themes…”. 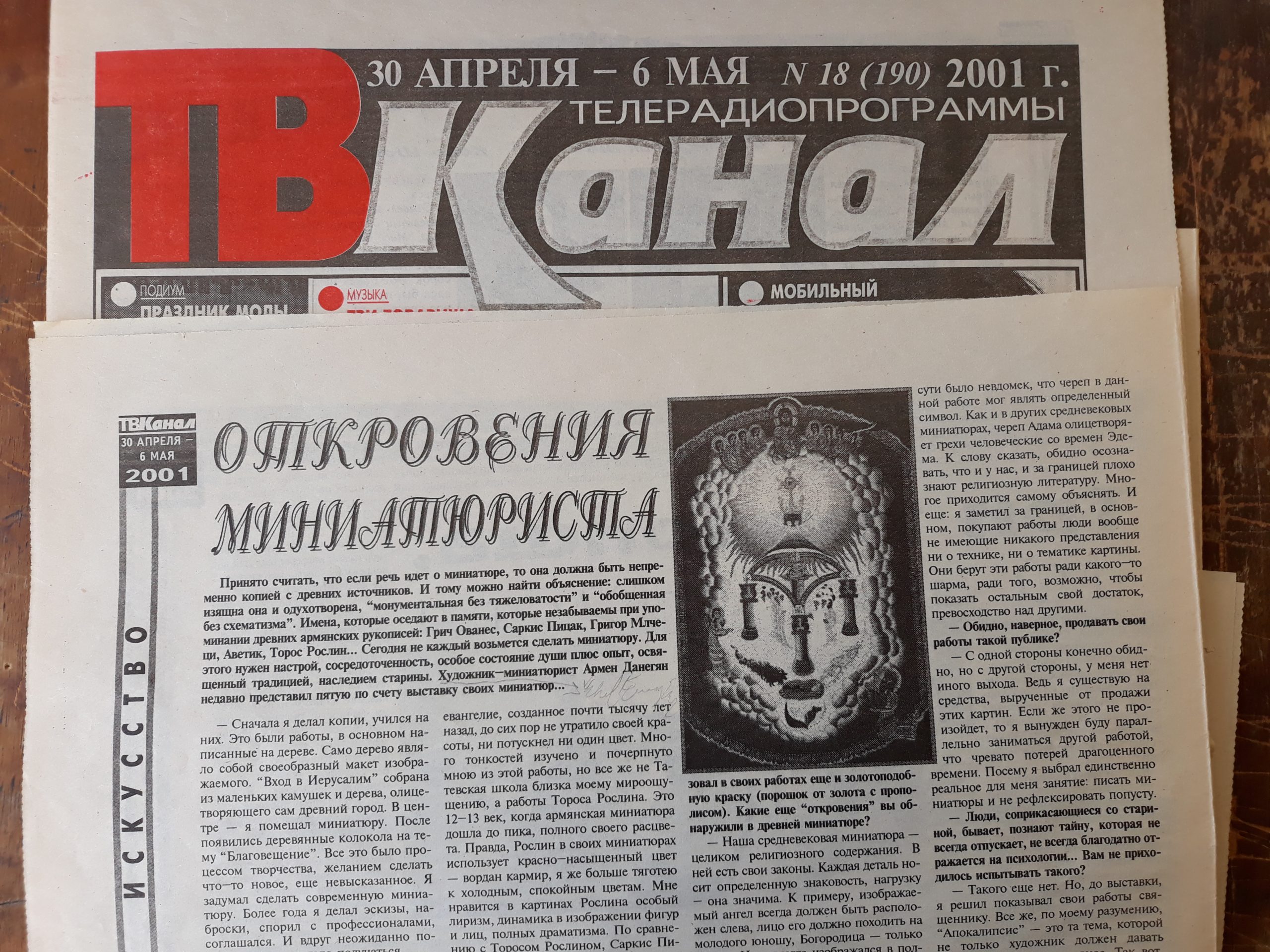 -At first, I was painting copies of famous miniature works. This helped to develop my professional skills. My artworks were on religious themes and I used to paint them on wood and paper. But then I got bored and started to create works of art in modern themes.

-In medieval Armenian manuscripts there are many Armenian miniature artworks, but the “Bible of Etchmiadzin” is different from the others.

-It’s surprising but the Bible, which was created 1000 years ago, is still very beautiful. I mostly like the Armenian miniature of 12-13th centuries, where red is the main color, although I prefer cool and calm colors. The red color is also called “Vordan Karmir”. I mostly like the movement and the drama of expression in the artworks of Toros Roslin. The other medieval miniature artist, Sargis Pitsak is also one of my favorites, but his colors are different from Toros Roslin’s colors. Under the influence of the artworks of those two miniature artists, I have created a new series, named “Apocalypse”.

-We all know that the medieval artists have saved some rules in their artworks. Do you follow those rules too?

-Of course, every detail has its own meaning. In the artwork “Annunciation” the angel must stand on the left, and the Virgo Maria on the right. In other works, the Judas is painted half-faced, which is his main difference from other apostles.I remember how a woman asked me a question about “The Crucifixion” during one of my exhibitions in Los-Angeles. She mostly wanted to know why there is a scull under the cross. She thought it would be better to paint a flower or some other element instead of it. I explained to her that this symbol has a meaning and expresses the human sins, which began in the days of Adam. The woman was so impressed that purchased the artwork immediately. 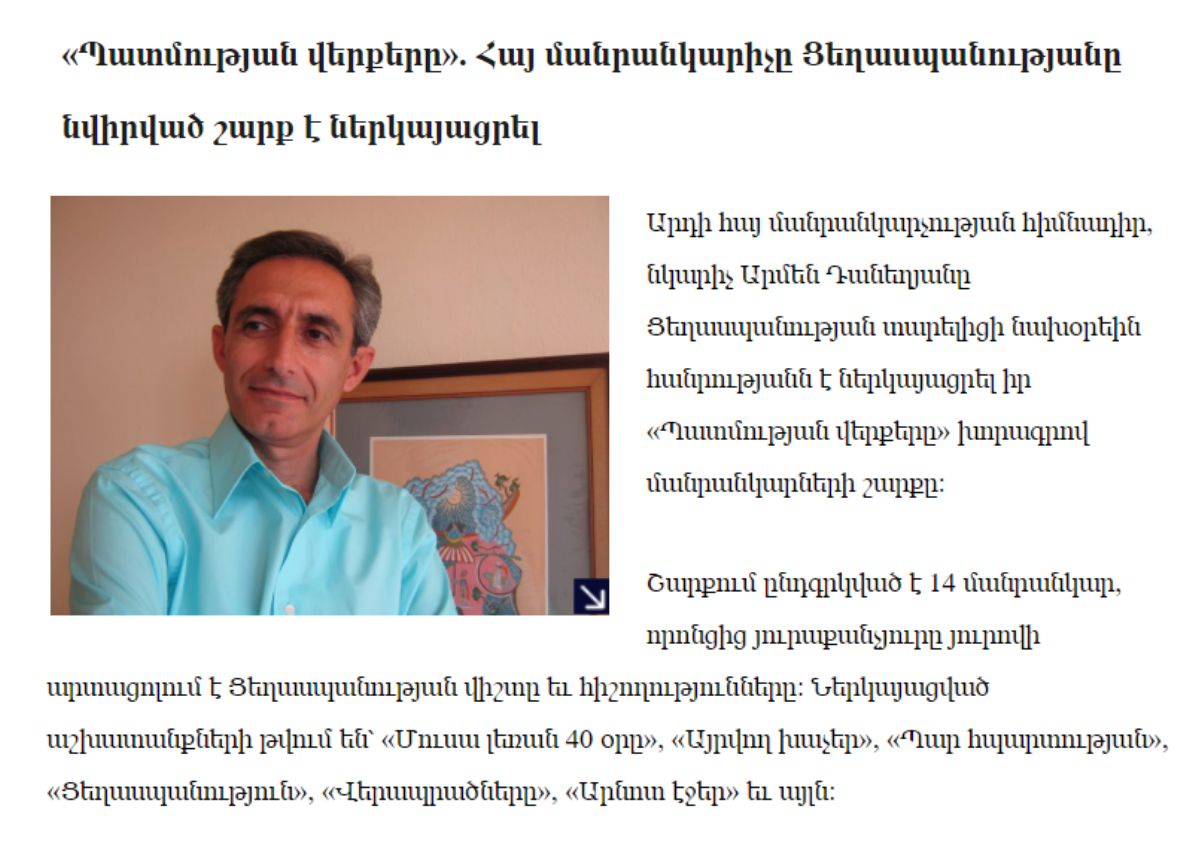 On the eve of the Armenian Genocide anniversary, the founder of Modern Miniature Art, artist Armen Daneghyan, presented to the public a series of artworks entitled “Wounds of the History”.

The series includes 14 miniatures, each of which reflects the grief and memories of the Genocide in its own way. Among the works presented are “40 Days of Musa Dagh”, “Burning Crosses”, “Dance of Pride”, “Genocide”, “Survivors”, “Bloody Pages” and others. 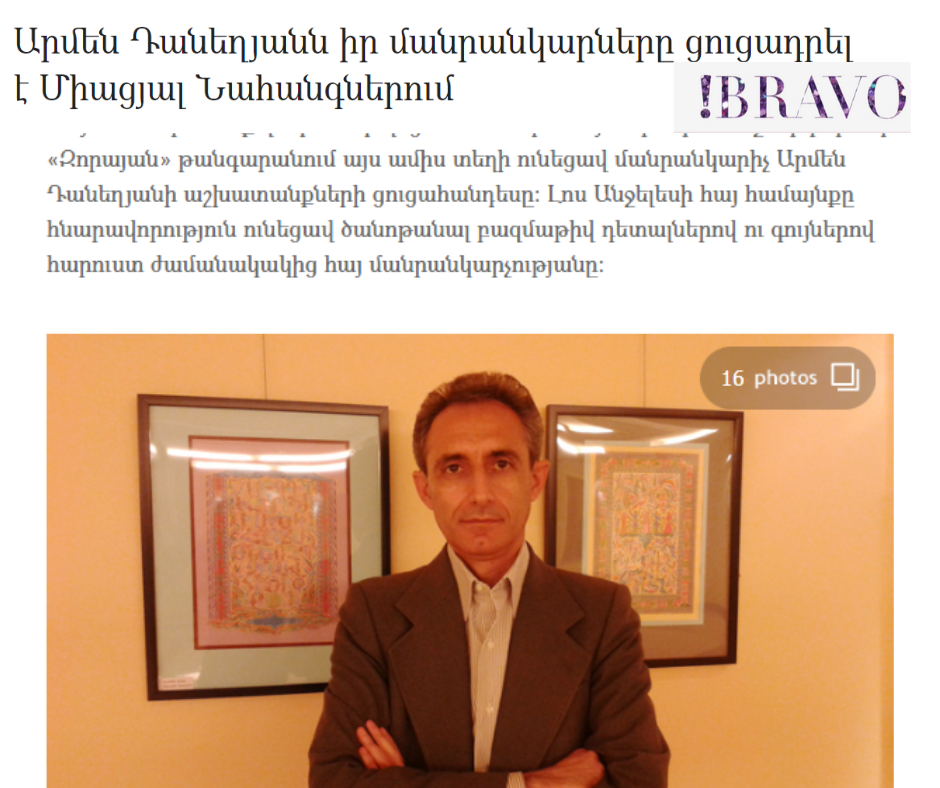 Armen Daneghyan has demonstrated his miniatures in the USA

An exhibition of artworks by visual artist Armen Daneghyan took place at the Zorayan Museum of the Western Diocese of the Armenian Church this month.

The Armenian community of Los Angeles had the opportunity to get acquainted with Modern Armenian Miniature artworks rich in many details and colors. 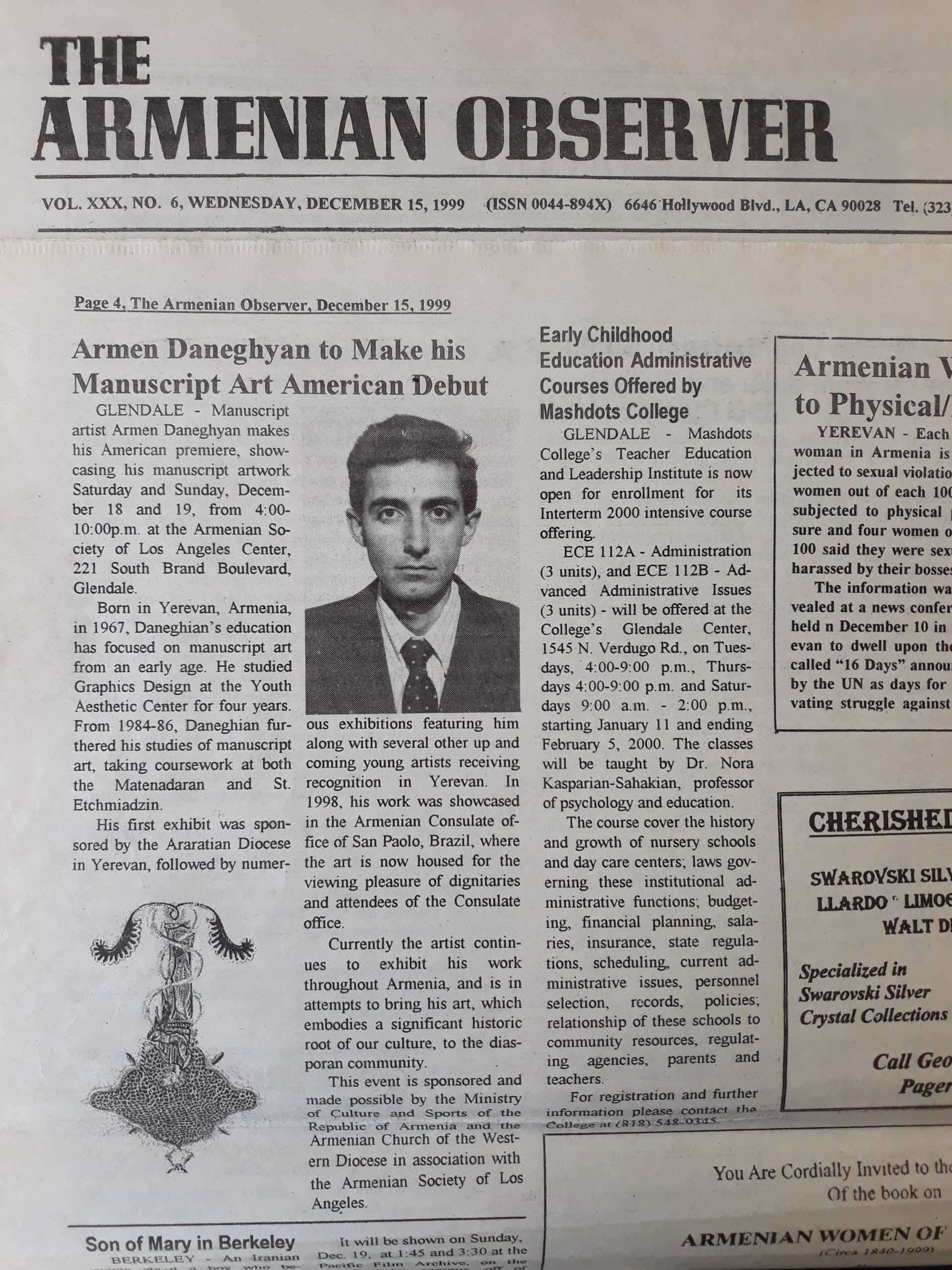 GLENDALE: Manuscript artist Armen Daneghyan makes his American debut, presenting his manuscript artworks on Saturday and Sunday, December 18 and 19, from 4-10 pm at the Armenian Society of Los Angeles Center.

Born in Yerevan, Armenia, 1967, Daneghyan’s education has been focused on manuscript art from Middle Ages. He studied Graphics Design at the Youth Aesthetic Center for four years. From 1984 to 86, Daneghyan continued his studies of manuscript art, taking courses in both the Matenadaran and St. Etchmiadzin.

His first exhibit was sponsored by the Araratian Diocese of Yerevan, followed by numerous exhibitions featuring him along with several other up and coming young artists receiving recognition in Yerevan. His work was showcased in 1998 in the Armenian Consulate Office of San Paolo, Brazil.

Currently, the artist continues to exhibit his work throughout Armenia, and is trying to bring his art, which embodies a significant historical root of our culture to the Diaspora community.

This event is sponsored and co-organized by the Ministry of Culture and Sports of the Republic of Armenia, the Armenian Church of the Western Diocese in association with the Armenian Society of Los Angeles.

The opening ceremony of Daneghyan’s solo exhibition in Ispahan took place in the center of HOZEYE HONARI.

30 works of art were represented. The Primate of Ispahan Archbishop Babgen Charian, artist Ani Babayan, a number of Armenian and Iranian art professionals gave a speech during the ceremony.

In his speech, the primate of Ispahan Archbishop Babgen Charian noted that the works of Armen Daneghyan are a mixture of modern and ancient art, a style unique to the Armenian culture. According to him, similar exhibitions bring together the Armenian and Iranian nations.

For press inquiries please use the form below.